70Ha farm with possibility to tourism and agricultural / forestry exploration

The Herdade do Vale do Sobrado, has about 70 hectares and is located in the southern region of the district of Portalegre, Alentejo.

Note that the urban part of this property is outside the agricultural reserve and also the ecological reserve, thus allowing new buildings and expansions very significant.

Then, we should also mention 24 hectares of traditional olive grove with 1,200 olive trees, which is currently not producing.

In addition to the sale of the property, and not included in the advertised sale price, a part is available for agricultural and forestry exploitation, of flat morphology, with slight undulations in the northern part of the property. It is subdivided in two parts: 1 parcel with 105 hectares, with 11.000 @ arrobas of cork, and 20 hectares of new cork oaks, with the strip already foreseen for 2025. Another parcel with 102 hectares, also with cork montado with a production of 17.000 @ arrobas, to point out, that there is a high number of young cork oaks of spontaneous growth with 8/12 years. Next harvests, already scheduled for 2022 with 9,000 @ arrobas and for 2027 with 8,000 @ arrobas of cork.If you intend to acquire these plots, together with the urban part, they value around 11.000 Euros/hectare, which makes a total of 4.967.000,00 Eur. We are talking about a total of 28 to 29 thousand @ arrobas of cork in all the strips. This cork is around 40 Euros / @ arroba, which amounts to: 1,1 Million Euros.

In a part of the estate has already been made a study for the construction of a dam with capacity to irrigate about 20 hectares of (vineyard / olive grove).

Finally we refer that in the last three years the Equestrian Tourism activity was developed with enormous success. The participants and tourists are from Sweden. This is only an Agency with great possibility of expansion. The turnover, only at the level of this sector: Accommodation and Equestrian Activity, has always been higher than 160 000 Euros, and the occupancy rate is around 40%. Substantial growth is expected in the coming years. 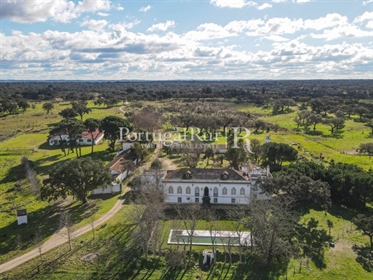 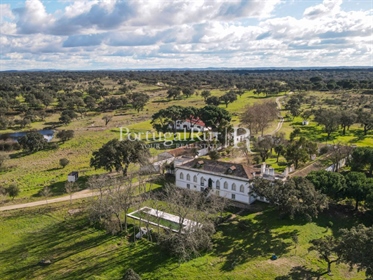 Number of mandate: 55A

In your space, save your alerts and favorites, and find your dream home in more than 56 different countries.
Connect
Create an account
‹ › ×

Green-Acres reminds that the use of the form by professionals for the purposes of non-sollicited direct marketing (spam) is prohibited. In accordance with legal obligations, Realist records your internet address (3.236.138.35) and reserves the right to sue in the case of fraudulent use.