Estate with 2 or 3 holiday apartments and sea view

This property is no longer available on our sites

The property (Quinta Perpetua) is offered in 2 alternatives:

Quinta Perpetua is located at a very quiet location on the South coast of the island, approximately 1 km distance to the sea and with an impressive sea view, overlooking the islands of São Jorge, Faial and Pico including Portugal's highest mountain, the Pico Alto. In a westerly direction, the view extends to the hills of the Serra Branca.
The Quinta is located as the only constantly inhabited house on a dead-end road, which continous as a hiking trail leading in approx. 20 minutes to the largest volcano crater on the island and runs into the route which circumnavigates the crater. This trail offers magnificent views of the south-eastern half of the island.
The estate belongs to the municipality of Luz equipped with a supermarket, post office, bus station and other village infrastructure. All accessible within 3 minutes walking distance.

During a 2001 holiday, we have discovered the ruins of the of this property and then bought it. It consisted of the remainders of a farm in the typical Azores style made of solid, dark lava stone.
Forty years the houses had been abandoned and they were built probably already towards the end of the 19th century. We acquired additional surrounding plots of land and began the restoration in spring 2003. Our concern was to preserve as much of the old building substance and structure as possible. Also, the architectural style of the newly build parts should fit to the island typical architecture.
In the summer of 2004, the apartments of Casa Corvo and Casa Pico were ready, so that we could move on it in the year from Switzerland on the island. Then, the construction of our today's House began Casa Graciosa and the initial environment work. In the summer of 2007, we could then take this House. In 2005, the ideal opportunity to buy former farmhouse plus the adjacent plot of land with a modest, surrendered. Also this House consisted of dark lava stone, was probably about the same age as our ruins and added our property with the associated property optimally. After it was used for a few years as a Garden House, it was also renovated and refurbished total. Despite the unmistakable modernization succeeded well, receive much of the old and traditional charm. The first guests were in the summer of 2013.

The garden was gradually with lava stone walls divided and structured, a lily pond with sunbathing terrace, a Pergola, a greenhouse and a vegetable garden and many more or less exotic plants, shrubs and trees planted.
As can be found in addition to wide range of flowers, vegetables and spices such as Various palms, Agave and Aloe species, an old plum tree, different Guavensorten, citruses (oranges, lemons, grapefruit, kumquats), avocados, mangoes, lychee, bananas, papaya, quince, tree tomatoes and berries.

Since 2013 is the Quinta Perpétua consolidated and consists of the following parts:

Since spring of 2016, Quinta Perpetua is officially recognized as 'Alojamento Local' and listed in the directory of the regional tourism authority.
Thus, we have realized our dream in the last 15 years and in a unique place on this peaceful island in the middle of the Atlantic Ocean a home close to nature created us, which we, whenever possible, to share with guests.

Now we are entering a further phase of life and decided to sell our loved property.

The island of Graciosa:

Graciosa - the graceful - is the second smallest of the nine Azores Islands of volcanic origin, which is an autonomous region belonging to Portugal. Graciosa is located in the Central Group, include the islands of Terceira, São Jorge, Pico and Faial. It has its own airport, like all the other islands also.
Distributed wind mills, the many on the island are striking either appealing renovated or left as ruins, surrounded by green fields and meadows… 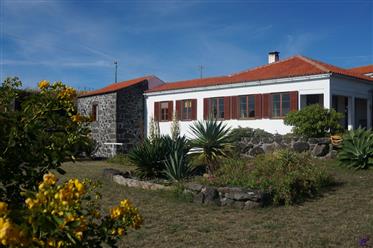 This property is not available for sale on our sites now

This property is in Luz, in Santa Cruz da Graciosa (district Autonomous Region of the Azores).

To remember your favourites, connect:

Green-Acres reminds that the use of the form by professionals for the purposes of non-sollicited direct marketing (spam) is prohibited. In accordance with legal obligations, Realist records your internet address (54.236.62.49) and reserves the right to sue in the case of fraudulent use.

Locality of the listing